Get competitive with your Club to climb up the ranks for BIG weekly payouts!

New League Season starts every Monday at 12:00 PM ET and lasts for a week. You have 7 days to collect as many League Points as you can to help your Club climb up the Leaderboards.

Clubs are randomly placed into different brackets based on their current League rank. For example, if your Club is in Silver III, you will be grouped with other Silver III ranked Clubs. A maximum of 25 Clubs are placed within each bracket.

The top performing Clubs within each bracket will be promoted to the next rank once the weekly Season ends and rolls over to a new Season. For example, if your Club ranked 1st within the Silver III bracket, you will be promoted to Silver II for the new week. From the bracket Leaderboards, there will be a green highlight around the top performing Club names to indicate a possible promotion. Clubs must maintain their position by the end of the Season to be promoted.

The bottom performing clubs within each bracket will be at risk for a demotion. Clubs that are at risk will be highlighted in red within the bracket Leaderboards. Clubs that are demoted will go down one Rank (e.g., Silver III down to Bronze I). 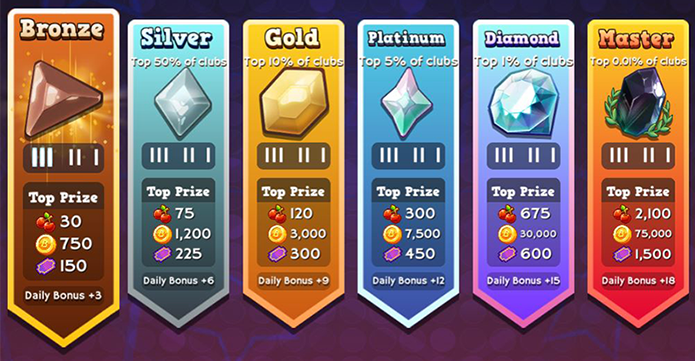 Where can I collect League Points?

The weekly Leagues Payouts are split between each contributing Club members. From the individual Club Leaderboards, the higher ranking members will earn a bigger "cut" from the Prize Pool.
To view the Prize Payouts, go to Clubs -> League Ranks -> Rewards. The Prizes shown are split amongst the Club members and sent to their Inbox at the end of the Season.